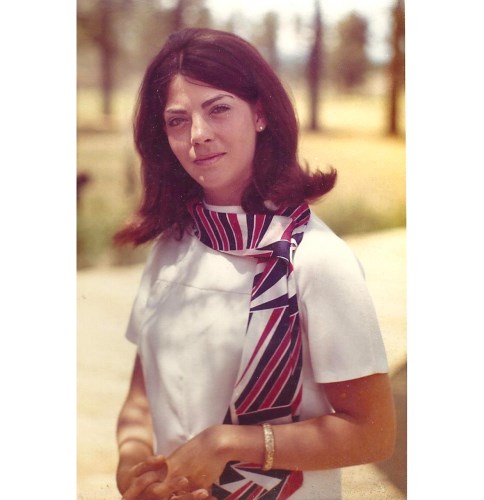 She grew up in Pagosa and was very active in school and her community. She was a Pirate Cheerleader, played clarinet in the band, was the editor of the yearbook, was a very skilled pianist, and was a member of the teenage Republicans. One of her fond memories was introducing Barry Goldwater at the Fine Arts auditorium at Fort Lewis.

After her parents divorced, she moved with her father who worked for the B.I.A. to Zuni, New Mexico where she graduated in 1967. Following graduation, she moved to Colorado Springs to live with her mother. It was there that she met Joe Dernoga, who was working on the NORAD project. The couple were married in 1969 and spent the next several years traveling due to his work with the government.

After her divorce, she returned to Durango where she worked as a real estate agent and later as an insurance agent. She was a leader for Girl Scouts and was instrumental in changing this area from the Mile Hi Council to Chapparal. Later, she moved to Pagosa where she was active in the American Cancer Society, Kiwanis, and became an organizer for Pagosa Spanish Fiesta. She loved supporting her youngest daughter, Jessica in school activities; especially sports.

Her final years were spent at Suzanne's home in Durango where she did crossword puzzles, talked to the pets, and watched the news. In her later life, she became an ardent Democrat and was quick to share opinions. She cherished having coffee with her youngest granddaughter, Julia. Upon her death, Julia commented, "I've lost my best friend."

A memorial will be held at 3:00 p.m. on September 11th at the home of Suzanne Garcia, 1000 County Road 206 in Durango. Condolences may be sent to the same address. Suzan is survived by her children, Suzanne Dernoga Garcia, Joseph Casimir Dernoga and Jessica Sue Martinez as well as granddaughters, Claudia Ilamae Garcia and Julia Jean Garcia.
Published by The Durango Herald on Sep. 7, 2021.
To plant trees in memory, please visit the Sympathy Store.
MEMORIAL EVENTS
Sep
11
Memorial service
3:00p.m.
at the home of Suzanne Garcia
1000 County Road 206, Durango, CO
MAKE A DONATION
MEMORIES & CONDOLENCES
0 Entries
Be the first to post a memory or condolences.