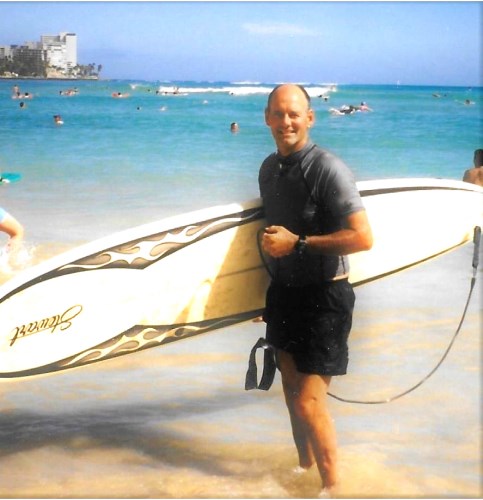 BORN
1950
DIED
2020
The loved ones of an amazing human being and a kind loving soul sadly announce the passing of Ralph Royal Masterson III. He left this life August 27, 2020 at 70 years of age. Leaving behind him a wake that will be surfed and skied for generations to come! Those who knew him well, know he lived his life with his foot on the gas and only the best will do.

He was born to Ralph and Geneva Masterson on March 11, 1950 in Longview Washington but spent his formative years in Ventura California. His early years were dominated by water, either in the pool at Buena High School on the swim team and water polo team or on the beach as a lifeguard (1969 Rookie of the Year Dory Races). After receiving a BA in Industrial Arts at Cal Poly San Luis Obispo he went on to teach shop and coach baseball at Lake Isabella High School.

In 1979 he moved to Durango Colorado with his high school sweetheart and wife of 33 years, Marsha and their two kids Kurt and Heather (Crotty). He started Masterson Construction and built homes that will stand for lifetimes to come. His favorite part of his job was the intricate woodwork and attention to detail. He did not only have talent for building homes he also built beautiful motorcycles. When he was not working, he enjoyed sailing, racing, and snowmobiling with his family and many longtime friends. He was always one to try anything and excelled at most of the things he attempted. He attended the Bondurant Racing School in Arizona and finished first in his class. He enjoyed racing his Corvette on Vegas tracks up to 155 mph. He also raced his 1940 Indian Motorcycle in "The Race of Gentleman" on Pismo Beach in 2016 with no brakes and one and a half legs! He was a HUGE fan of motorcycles and rode everything from enduro to Harleys.

In his later years, his grandkids Merin, Cade, and Tauer became his true love and he now raced to show them all the lust he had for life. He would do anything to spend time with them camping, riding, and eating Oreo's. Most days he could be found listening to the Eagles and tinkering on something in his garage with his dogs by his side.

Although gone too soon, Ralph left behind a love for life and fearlessness of the unknown we all could use a little of. His ashes will be spread in his beloved mountains and at sea. In lieu of flowers please consider a donation to The Children's Alopecia Project or La Plata County Humane Society. A Celebration of Life will be held at a later date. Ralph would love for you to honor his memory by spending a day doing whatever "cranks your motor" with the ones you love!
To plant trees in memory, please visit our Sympathy Store.
Published by The Durango Herald on Sep. 10, 2020.
MEMORIAL EVENTS
No memorial events are currently scheduled.
To offer your sympathy during this difficult time, you can now have memorial trees planted in a National Forest in memory of your loved one.
MAKE A DONATION
MEMORIES & CONDOLENCES
15 Entries
Wow, I’m here in Durango, Mancos and Cortez. I was looking on Facebook for Ralph or Marsha and saw the OB. I last visited Ralph in 1992 stayed with him on the river. “Well Bud I’ve always enjoyed your company. Wish I could of seen you again. RIP .”
Roger Caswell
Friend
September 24, 2020
We will truly miss him. Ralph gave me my first job with final cleanup on new construction (Custom Cleaning), that lasted15 yrs. This is where I met my husband Curt (Nelsen Electric), now 25 yrs later. I I'm very grateful I was able to have a long chat with him right before he passed. Ralph will truly be missed!missed! Our deepest Condolences, Heather and kids.
Mindy Nelsen
Friend
September 18, 2020
So sad to see you leave so soon!!! Always enjoyed running into you around town. And, will cherish all the good times we had sailing with you at Navajo Lake! RIP
Bob and Jenny
Friend
September 17, 2020
I will never forget skydiving in Phoenix on New Year’s Day. You taught me to ride a Harley! I loved getting sushi on my birthday! I’ll miss you friend. You are special.
Laurie
Friend
September 16, 2020
A friendship filled with lots of fun, adventure, adrenaline, craziness, a few tears through the years and a dash of sadness and worry. We will always have you in our hearts and sprinkled in the stars. RIP to our friend. You left quite a mark I hope you knew that.
Brett and Lori
Brett and Lori Rundquist
Friend
September 14, 2020
Missing you, Ralphie. Gone too soon, and I will focus on all the great times I got to spend with you. I wasn't done, I wasn't ready. But you were, and you will always hold a very special place in my heart. You were top-notch, and I will continue to honor your memory and ENJOY. DONE DEAL. Love you, buddy. I hope you hear me talking to you from my garage.
Erin White Sinberg
Friend
September 14, 2020
Damn. i have always held Ralph as my example of a real contractor. The test was always at completion are you still friends with the owners. He always was. You were one of a kind Ralph.
Cap Allen
Friend
September 13, 2020
Missing you already...
My awesome brother. Keeper of my secrets. Larger than life to me. My good friend.
I can still hear you saying at the end of all our conversations, “It’s all good”.
I wish we had more time.

Karen
Karen Miller
Family
September 13, 2020
We sure are going to miss you Ralph. Thank you for sharing the sunsets with us at the lake and all the great stories. Thankful that are paths crossed and we could call you are friend. Bill and Jody
Friend
September 13, 2020
Ralphie We will miss you, and your quick smile. I always enjoyed the times you would come into Handlebar, snowmobiling trail riding it was a pleasure to have had you in my life. Twist it hard Buddy,
Jon Carmack
Friend
September 12, 2020
Old friend, You will be missed.. Our time growing up was special...
Randy Slye
Friend
September 12, 2020
Happy Trails. Ralph.
Our Condolences, Heart’s & Prayer’s
Are Extended Out to all of your Family. It’s been a Pleasure to say the least! See ya down the Road,
My Friend! RIP. P.T. & Joann.
Friend
September 11, 2020
Thank you Ralph for all you did. You were one of a kind.
Bob Rule
Bob Rule
Friend
September 11, 2020
What a treat it was to bump into you in this world, Ralph; and what a pleasure and honor it was to participate in creating the joy you brought to all your lucky clients. Thanks, man. Thanks so much!
“Mr. Davitt”
Davitt M. Armstrong
Friend
September 11, 2020
A truly great human being who inspired me to strive for a better self and a better life. I love you and I'll miss you Ralph.
Sabra Lin
Family
September 10, 2020
Showing 1 - 15 of 15 results