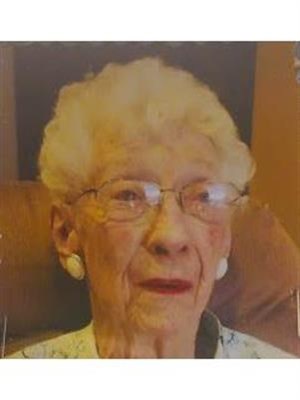 Lillian Martin died on October 23, 2019, after a brief stay at Hospice of Mercy. She was just several weeks shy of her 96th birthday. "Lil" was born in Durango, Colorado, to Art and Kathleen Pearce on November 9, 1923. She married Tommy Martin on September 3, 1950, and spent 64 happy years with him before his death in 2014. Her working career included positions with Burns and First National Bank, and Turner Insurance. She is survived by her daughter, Barbara, of Durango; son, Tom Jr., of Lebanon, Oregon; four grandchildren and 11 great-grandchildren; sister, Joanne Brennan; and numerous nieces and nephews. Per her wishes, cremation has occurred. Lillian Martin
Published by The Durango Herald on Oct. 28, 2019.
To plant trees in memory, please visit the Sympathy Store.
MEMORIAL EVENTS
Oct
30
Funeral Mass
10:00a.m.
Sacred Heart Catholic Church
CO
MAKE A DONATION
MEMORIES & CONDOLENCES
2 Entries
Jack and Janeen Shilaikis
November 1, 2019
Hey Barbara. I saw in the newspaper today that your mom had passed. My deepest sympathies my friend! Your mom was such a sweetie. Before she was in Sunshine Gardens, I would see her and your dad at the grocery store quiet often, and she always knew who I was, and always spoke. When my mom first moved to Sunshine Gardens, your mom was very nice to her, and always spoke to me when I would see her in the dining room. Our love and prayers to you and your family. Evelyn Gore McLaughlin
Evelyn Gore/McLaughlin
Friend
October 26, 2019
Showing 1 - 2 of 2 results