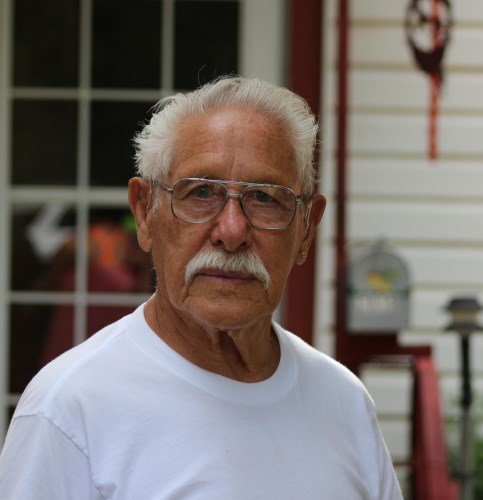 FUNERAL HOME
Hood Mortuary - Durango
1261 East Third Avenue
Durango, CO
John "Sam" Samuel Lopez passed from complications after surgery to drain accumulation of blood in the brain cavity at age 93. Sam was born at home in "Chihuahua" (today's Roosa Avenue in Durango) at a time when doctors still made house calls, although we don't know if one was present. He spent his boyhood there. He would earn money by going up into the hills surrounding Durango to gather wood to sell to the old-age pensioners. During one of these outings his burro got stubborn and refused to move. Sam lit a match under him and the burro up-and- kicked him in the chest leaving a wicked scar. At about eighteen he went to work for Durango Coca Cola not knowing that he would retire from there in almost seventy years at age 86. At nineteen he took a break from Coca Cola to join the Army and served in Korea where he suffered injuries. He was honorably discharged in 1947 receiving the World War II Victory Medal. He immediately returned to work at Coca Cola. Sam was persistent if nothing else. Sixty seven years at one job is ample evidence. He imparted his admirable work ethic to his children...one of his most precious gifts to them. The following sampling of comments provide a glimpse into Sam's unique personality and sense of humor. Family members were asked give a short statement of what they remembered about Sam. They responded: "Sam took me for an ice cream cone on our first date. He always said he rescued me from my home town in northern NM." "Dad Sam loved life, his family, and his friends." "Dad could make friends with anyone, and people just naturally liked him." "He would say: 'drink beer, not pop, it's better for you'." "After Dad's fishing pals died, I got the privilege of becoming his go-to fishing buddy, and he would tell me: 'Don't share my secrets that I tell you when we are fishing'." "Dad once talked me into picking up what he thought was a recent roadkill deer saying the meat was still good. We began butchering it in my basement, the smell was stinky-horrible and didn't leave for a month." "Dad was "grandpa-gum to all his grand-kids. He always had a stick of spearmint to share." "All of Dad's toddler grand children would just love it when he would place them on his knee and bounce them singing: 'tippy-tippy gampo, dippy dippy doo!'," "I remember Grandpa Sammy's voice the most; he had a booming voice that was fun to listen to." "Fishing with Grandpa at Electra Lake and him singing the ditty 'Angelina, Angelina en la tapatia'." "Grandpa asking me if I knew what he did at work. He would say: 'I go to work, I eat a cookie, I work a little, I eat another cookie, work some more, then I go home'." "Sam saying when interrogated a little: 'Boy you sure ask a lot of questions'. But he didn't listen to himself when he asked lots of questions." "I Loved to see Sam riding his Elvis Presley bicycle at age 90."

Sam loved to fish. A Grand-Daddy Pike is stuffed and hangs in his living room wall. After work you would find him on the Animas River with his pole. On weekends he would head up to the mountain lakes with boat and friends in tow. He equally liked deer and elk hunting. He loved his dogs and cats. Sam enjoyed watching professional boxing and old western movies. When Jeopardy and Wheel-of-Fortune were on, he was right there.

In lieu of flowers send contributions to your favorite charity.

A service will be announced at a later date.
Published by The Durango Herald on Apr. 20, 2020.
To plant trees in memory, please visit the Sympathy Store.
MEMORIAL EVENTS
To offer your sympathy during this difficult time, you can now have memorial trees planted in a National Forest in memory of your loved one.
Funeral services provided by:
Hood Mortuary - Durango
MAKE A DONATION
Please consider a donation as requested by the family.
MEMORIES & CONDOLENCES
Sponsored by Hood Mortuary - Durango.
5 Entries
Sam worked with my father at Coca Cola for many years. I had the privilege of speaking with him only a few times, but from those short conversations I know that the earth is a lesser place without him, and it's heaven's gained. My sympathies for your loss.
Larry Reeder
April 24, 2020
I had the pleasure of working with Sam for several years at Coca-Cola. He was always in a great mood and ready to start the day with a few jokes and stories to share. I left that job in '08 and he has still managed to pop into mind frequently. He was a wonderful man who will be missed and certainly not forgotten.
J Schaefer
April 24, 2020
Sam was one of our favorite "customers" at Coors. We loved his stories. Rest in Peace Dear Sam.
April 21, 2020
Sam was a good friend of my parents and our family, he and Delia attended all of our special events like weddings and 3 of my parents anniversaries. We will all miss him. Our condolences to the family. May you rest in heavenly peace.