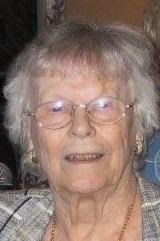 Harry Young and Helen McNaul. She graduated from Queen City High School in 1937. She was on the

basketball and track teams and ran in the time trials for the 1936 Olympic team.

moved to Sioux City, IA where Mrs. Turner was a member of the City Choir and active in her church

while raising her children and helping her manager husband in the office. The family moved to Denver,

CO in 1956. While living there she began a career in retail sales of women's wear and accessories at The

After her sons were grown with families of their own she and her husband moved to Durango in 1975.

department until her retirement.

She was predeceased by her husband of 62 years, Jack Arthur Turner, in 1999, and her oldest son, Robert

Michael Turner, in 2012. She is survived by her youngest son, retired Durango Municipal Court Judge,

Her cremains will be placed next to those of her husband in Greenmount Cemetery. A celebration of her

life will be held at a later date.
Published by The Durango Herald on Dec. 29, 2014.
To plant trees in memory, please visit the Sympathy Store.
MEMORIAL EVENTS
To offer your sympathy during this difficult time, you can now have memorial trees planted in a National Forest in memory of your loved one.
Funeral services provided by:
Hood Mortuary - Durango
MAKE A DONATION
MEMORIES & CONDOLENCES
Sponsored by Hood Mortuary - Durango.
1 Entry
I am so sorry for the loss of your mother, David! Please express my condolences to the rest of your family as well. Sincerely, Paula Liermann
January 2, 2015
Showing 1 - 1 of 1 results