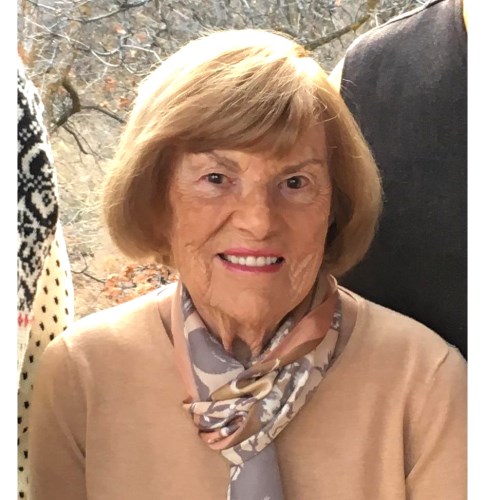 Elizabeth V. Benefiel, loving wife, mother, and grandmother, gently passed away of natural causes on June 23, 2020 in Durango, CO surrounded by family. She was 96.

Beth was born on March 31, 1924 in Waverly, IL to Zerelda and Charles Seales, and grew up in Auburn, IL, with her two older brothers, Charles and Keith, who proceeded her in death. She received her Bachelor of Arts in English and Spanish from the University of Illinois. She went on to teach high school English and Spanish in Dixon, IL, where she met Leland Shoaf. Beth and Leland were married from 1947-1970 and raised three children, Leland (Trip), Jeffrey, and Lezlie. Beth was very talented and excelled at many things including golf, bridge, and cooking. She loved life and living in the quaint, small village of Grand Detour located along the banks of the Rock River where many lifelong friendships were formed.

After the marriage ended, Beth was married to Tom Hoye from 1971-1977. They moved to Elgin, IL where she was Executive Director of El Centro de Informacion y Progreso from 1976-1984, an agency providing supportive services. Continuing her education was always paramount to Beth, and in 1978 she proudly received her Masters of Science in Management and Development of Human Resources.

Beth next moved to Durango, CO in 1985 to be near her family and especially her twin granddaughters, Emily and Natalie, whom she loved dearly and helped raise as their "Mima." She married Alan Benefiel in Durango, CO on February 7, 1993. They loved their weekly bridge games at the Senior Center and never missed a Denver Broncos game. They also traveled the world together and loved to experience new cultures and languages. The Benefiel family gatherings were always a highlight in her life.

Beth was passionate about spending time with her family. She loved to cook - some of her specialties were chili sauce, homemade jam, and Granny's cinnamon apples. She was a student of life and an avid knitter, reader, and - being an English teacher - she loved to correct her family's grammar. Her love of life can be summed up by one of her favorite quotes, "Life is so uncertain, let's eat dessert first."

Beth was preceded in death by her oldest son, Leland (Trip) Shoaf, III and is survived by her two other children Jeffrey Shoaf of Aspen, CO and Lezlie Shoaf Mayer (John) of Durango, CO. She is also survived by her husband, Alan Benefiel Sr of Durango, CO and his two sons, Alan and Howard, and their families. Additionally, Beth is survived by her three granddaughters and a great-grandson: Natalie Mayer Johnson (Luke) of Boulder, CO; Emily Mayer Jackson (Brian) and their son Brooks of Denver, CO; and Elizabeth Shoaf of Schaumburg, IL. No memorial service has been planned at this time and in lieu of flowers, donations may be made to Mercy Hospice House, Durango, CO.
Published by The Durango Herald on Jun. 29, 2020.
To plant trees in memory, please visit the Sympathy Store.
MEMORIAL EVENTS
To offer your sympathy during this difficult time, you can now have memorial trees planted in a National Forest in memory of your loved one.
MAKE A DONATION
MEMORIES & CONDOLENCES
3 Entries
I worked with Beth at Crawford Claims Adjusters in the West Bldg. She was always a kind, sweet lady to work with. She will be missed.
Wanda Cason
Coworker
July 6, 2020
Beth was truly a special lady. She will be missed. The last time we shared a meal with them, she made the special Granny's cinnamon apples. I will never forget her beautiful smile and kind heart.
Kelly Brown
June 30, 2020
May the love of friends and family carry you through your grief.
Willa Beatty
Friend
June 29, 2020
Showing 1 - 3 of 3 results