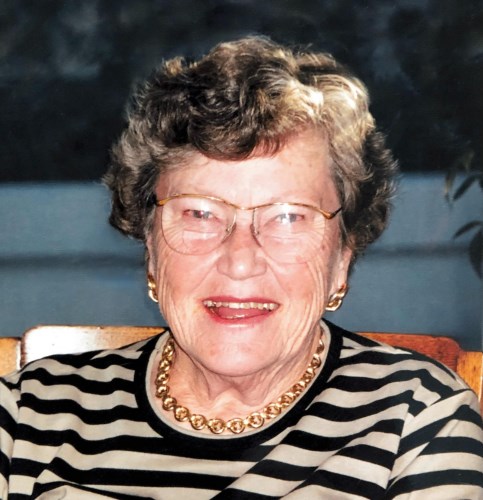 She was born on March 8, 1926, in Henderson, KY, the fourth of five children raised on a farm. She attended Sweet Briar Collage in Virginia with the intention of becoming a doctor. Her plans were interrupted by Second Lieutenant William Hopkins Stites, who had just graduated from the US Military Academy at West Point. They fell in love on a blind date in August 1945 and married less than a month later, after which her new husband left to serve in the occupation of Japan. She was 19; he was 21. She joined him a year later after the US Army decided it was safe to do so and gave birth to their first child, Sam, in Tokyo.

Returning to Fort Knox, KY, between two more children, Ann and Tom, her husband left to fight in the Korean War. In 1956 the family moved to Paris, France, where Mrs. Stites gave birth to her fourth child Lia. After several assignments back home, the family headed overseas again in 1968, to Kathmandu, Nepal, where her husband served three years as military attaché with the US embassy. There Mrs. Stites hosted dignitaries and royalty from many countries while exploring the Indian subcontinent from the Himalayas to the plains of India.

The couple retired to Monument, CO, in 1973 and spent 30 years in active retirement with many international trips. After her husband of 57 years passed away in 2002, Mrs. Stites relocated to Durango. It was her 28th household move.

Throughout her life Mrs. Stites was a perpetual volunteer. She was a devout Presbyterian and served as a deacon and elder. She was also a long-time member of the P.E.O. Sisterhood, a national woman's philanthropic educational organization, and active in the Durango chapter.

A celebration of her life and memorial service will be held at the First Presbyterian Church of Durango, 1159 E 3rd Ave., on September 4, 2021, at 11 a.m. In lieu of flowers, memorial donations may be made to the First Presbyterian Church of Durango or to the P.E.O. Foundation. Mrs. Stites will be buried in Henderson beside her beloved husband Bill in Fernwood Cemetery. Published by The Durango Herald on Jul. 27, 2021.
To plant trees in memory, please visit the Sympathy Store.
MEMORIAL EVENTS
Sep
4
Service
11:00a.m.
First Presbyterian Church of Durango
1159 E 3rd Ave., CO
Funeral services provided by:
Hood Mortuary - Durango
MAKE A DONATION
MEMORIES & CONDOLENCES
Sponsored by Hood Mortuary - Durango.
2 Entries
Dee was a fascinating and dear friend to us during her many years in our First Presbyterian Church congregation. We extend our deepest sympathy to her children and family. Regretting that we were out of town and unable to attend her memorial service.
Jan & Bill Postler
Friend
September 5, 2021
A lovely lady a wonderful neighbor. She will be greatly missed!
Charles W Oliver
Friend
July 28, 2021
Showing 1 - 2 of 2 results