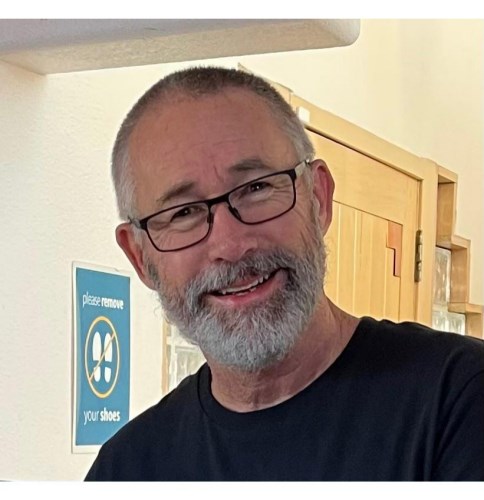 BORN
1962
DIED
2021
Chris DeWayne Brickey, 59, passed peacefully surrounded by his family on September 21, 2021. Chris, a resident of Victoria, TX, was born at Fort Hood in Killeen, Texas on September 20, 1962. After living in many parts of the country, his family settled in Spiro, OK in 1973 where he attended school and graduated from Spiro High School. Chris went on to attend Carl Albert State College and Oklahoma State University. Chris lived in many places during his adult life including Stillwater, OK, Castle Rock, CO, and Durango, CO.

Chris had a a big smile and a bigger heart and was always generous with his time and affection. Known for his easy-going manner, Chris was fun to be around and a friend to many. Chris was adored by his family and was a constant source of love and strength. His infectious personality instantly put all at ease and his smile was contagious.

Chris's favorite activity was spending time with his family. He loved his grandchildren more than anything. Whether he was walking his granddaughter to the bus stop on the first day of school or playing with his grandsons on the floor, his happy place was with them. He was the best Papa and adored by his grandchildren.

Chris, always athletic, found a new hobby as an adult playing hockey and spent many hours on the ice with his son always enjoying the yearly pond hockey tournament in Creed, CO. Chris was an avid Colorado Avalanche Fan and loved college football, especially the "Pokes." Chris was big supporter of C.A.S.T. for Kids and was always generous with his time and resources to all who needed help.

A celebration of Chris's life will be held on October 9, 2021 at noon at his parent's home, located at 1701 Monaco Dr., Allen, Texas 75002. Donations in honor of Chris to C.A.S.T. for Kids, the American Cancer Society, or other charity of your choice are appreciated.
Published by The Durango Herald on Sep. 27, 2021.
To plant trees in memory, please visit the Sympathy Store.
MEMORIAL EVENTS
Oct
9
Celebration of Life
12:00p.m.
his parent's home
1701 Monaco Dr., Allen, TX
MAKE A DONATION
Please consider a donation as requested by the family.
MEMORIES & CONDOLENCES
4 Entries
Rest In Peace my friend......I was so shocked and sad to hear of Chris´ passing. He was always so positive, uplifting and willing to help. I worked with him at Exterran/Archrock and we had the best time bragging and sharing photos of our grandchildren! If he wasn´t helping me figure out "Jam at Z´ on that beast of a printer, or some issue with my computer - we were talking about family. Praying for comfort for his family during this sad time.
DeAnne McKee
Work
October 3, 2021
I had the honor and privilege of working for and with Chris over the past 9 years at Exterran/Archrock. He possessed so many great qualities that would inspire everyone that he met. I truly believe that Chris could walk into a room of strangers and walk out of the same room with a handful of lifetime friends. He and I traveled together to multiple remote locations during his years of service and I witnessed how he interacted with everyone we met. The smile on his face was infectious and I can attest that he never had a negative outlook on anything. He had so many great qualities; too many to list. He will always remain as an inspiration to me to live life to its fullest, as he did. My deepest condolences to his entire family and extended family of lifetime friends after their loss. In Memoriam. Jerry Guerra
Jerry Guerra
Work
September 28, 2021
It was my pleasure to work with Chris for 7 years, he was also a personal friend. Rest in Peace my friend.
Gino Juisto
Friend
September 28, 2021
Chris was such a kind and caring person and friend to all that knew him. My heart aches for his family . Sending love and prayers!
Lisa (Maxwell) Guthrie
School
September 27, 2021
Showing 1 - 4 of 4 results